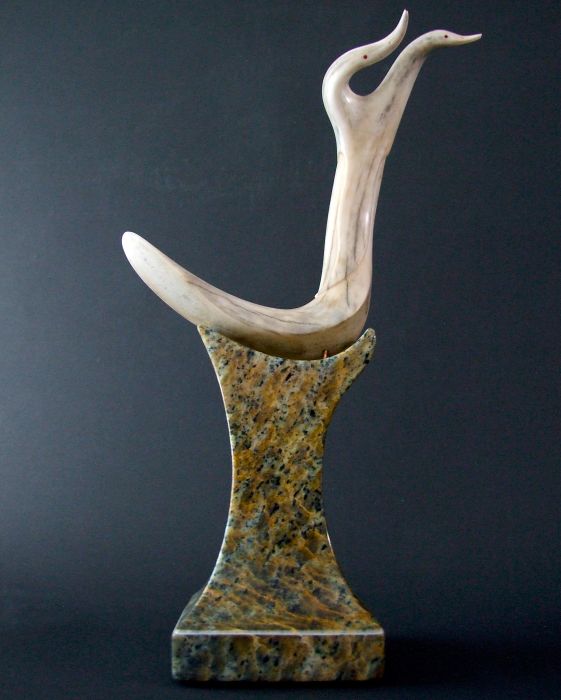 While in the Alberta Badlands as part of a scientific excursion with The Explorers Club, I came across a white-tailed deer antler. Immediately, I could see a two headed bird within the shape of the antler. From the antler, I carved the graceful two headed bird which I perched alongside a beautiful clear stream rippling over reflected pebbles. The stream is carved from a highly polished magnificent piece of Brazilian soapstone. To bring the base to a polish required 25 hours of hand sanding, starting with 400 grit sandpaper followed by 600 grit and then 1,000 grit and finally 2,000 grit. The birds’ inset eyes are hand faceted and polished Almandine Garnet from Sri Lanka. As it is with all of my artwork, no power tools were used to make this sculpture.

Battle of The Orca & Thunderbird | Peregrine Falcon Emerge from The Void | Self Portrait Bust | Jonah and the Great Whale | Angel of the Lord | Ball Python Twins | Two Headed Bird | Back Flip Orca | Tree Frog | Stylized Angel Fish | Enoplosus Armatus | Baby Orca | Surfing Seal | Jonah and the Great Fish | The Raven | Boy who became an Eagle | Brujo and His Ally | Peace Pipe | Stó:lō Style First Nations Drum | Nebula | The Kiss | We Are All in This Together | I Can’t Hear You  | Salmon | The Traveler | Battle of the North and South Winds | Applause